I am writing to request 5 corrections to the article on ancient DNA that appeared in this week’s The New York Times Magazine.

Please note that this request is in addition to the letter to the editor that I submitted on Jan. 19, which was aimed at your primary readership, and which I believe should appear in print in the magazine.

As you know, in the fact-checking process I was sent more than 100 statements of which a very high proportion (more than half) were incorrect. For example, as I mentioned to you in my letter of January 7, 20 of 49 statements presented to me for review on January  2 were incorrect, and 27 of the 36 statements presented to me for review on January 5 were incorrect. The high rate of errors was concerning as it suggested that the narrative based on them might not be supported by a solid set of facts. While a substantial number of these incorrect statements were removed through your fact-checking process, some errors got through, and I am therefore now requesting formal corrections of the following 5 errors that meaningfully affect the article, so it is important to set the record straight on them. (I have also identified additional errors, but those are for the most part smaller, so I am not requesting corrections in those cases.)

(Correction 1)  The article wrongly states that Skoglund et al.  Nature 2016 was accepted after appeal “over the steadfast objections of two of the three peer reviewers on its anonymous panel.”

There were four reviewers on the panel when the paper was accepted. This is important, because the fourth anonymous reviewer was added as the arbitrator during the appeals process, and that reviewer’s involvement (not discussed in the article at all) and positive assessment was a key part of the rigorous appeal process that led the journal to the decision to accept.

Note that I pointed this out in my fact-checking reply on January 2, where I wrote: “On July 6 2016, we received second round reviews of the manuscript which included comments not just from the original three reviewers but also from a newly added 4th reviewer who was very positive.”

(Correction 2)  The article wrongly states that the revision of Skoglund et al.  Nature 2016 “addressed very few of the other reviewer concerns.”

The revision addressed every one of the reviewers’ scientific concerns (that is, concerns about the convincingness of the claims about population history based on the evidence provided). As evidence for this: (a) after receiving the revision Reviewer #2 wrote that “The first 5 revised points are acceptable” [this referred to all of the scientific points], and (b) Reviewer #3 did not identify any unaddressed scientific concerns from the initial set of reviews. Finally, (c) in Nature’s final decision letter sent to us on August 25th 2016, the newly added arbitrating Reviewer  #4 wrote: “The latest revised version of the ms addressed all the issues that were previuosly [sic] raised by the reviewers.”

It is possible that the anonymous reviewer(s) told Gideon Lewis-Kraus that very few of their concerns were addressed by the revisions, but Lewis-Kraus never confirmed that with me, and I have evidence that contradicts it. With an anonymous source it is especially important to fact-check against available confirmatory information, and this was not done.

(Correction 3): The article wrongly states that I claimed that the Skoglund et al. Nature 2016 paper “conclusively demonstrated” no Papuan ancestry in the Teouma Lapita individuals.

If Lewis-Kraus has a note that I said this I am sure that this note is in error or that the quote was out of context, as I never believed this and have never argued for this. The Skoglund et al. paper was crystal-clear in the main text that the Teouma individuals were consistent with some Papuan ancestry (up to 11%), and my conversations with Lewis-Kraus happened well after my colleagues and I published a second paper proving some Papuan ancestry in the Teouma individuals. Even if Lewis-Kraus was able to point to a quote from me that seemed to suggest this, it is not appropriate to cite this given that: (a) it is out of context, (b) it contradicted my view stated clearly in Skoglund et al. 2016, (c) it contradicted my view stated in Lipson et al. 2018, which was published well before my interview with Lewis-Kraus, and (d) it was a misunderstanding on Lewis-Kraus’s part of my views that I corrected in the fact-checking correspondence (see below).

To go into detail on that fact-checking correspondence, on Jan. 7 I sharply contradicted the statement that was sent me to check that “Lipson et al. applied higher-resolution analysis to the three Teouma skulls than had been done in Skoglund et al., and the resulting data showed higher traces of Papuan ancestry,” writing:

You nevertheless persisted in making this false assertion. In Cynthia Cotts’ fact-checking email of Jan. 10, I was told that: “The assertion that Lipson et al. reported higher levels of Papuan ancestry, and was thus a walking back of Skoglund et al., remains in the story. I am aware that you disagree. I will advocate that this be attributed to critics of your work.” I replied: “It’s a matter of scientific fact not academic disagreement — it would be an error in the article that would need to be corrected after publication if it stayed this way.”

In the final version of the story, the statement is essentially still there. However, now the only justification cited (all the other evidence had fallen apart) is Lewis-Kraus’ notes, which attribute a view to me that is incompatible with all other lines of evidence — what I had published, what I believed, and what I clarified through the fact-checking process.

(Correction 4): The article wrongly states that in 2015 my colleagues I argued that the population of Europe was “almost entirely” replaced by people from the Eastern Europe Steppe. More generally, the article states wrongly that “Earlier paleogenomic results established thousands of years of heady mixture among long-forgotten ancient populations.  With the relatively recent rise of everything we associate with “culture” — technologies like agriculture, metallurgy and eventually writing — much of this continuous “admixture” began to give way, it seemed, to discontinuous episodes better characterized as “replacement” or “turnover.” That is, about 5,000 to 9,000 years ago, human history was, at least in a few crucial places, less about various groups coming together and more about some groups blotting out their neighbors.”

This is flatly contradicted by the evidence and by my whole body of work, as well as the work of all my colleagues in ancient DNA, over the last few years.

Below right is Figure 4 of Lazaridis et al. Nature 2016, which shows how all West Eurasians are profoundly mixed due to events in the last 9,000 years — a model as different from replacement as possible. 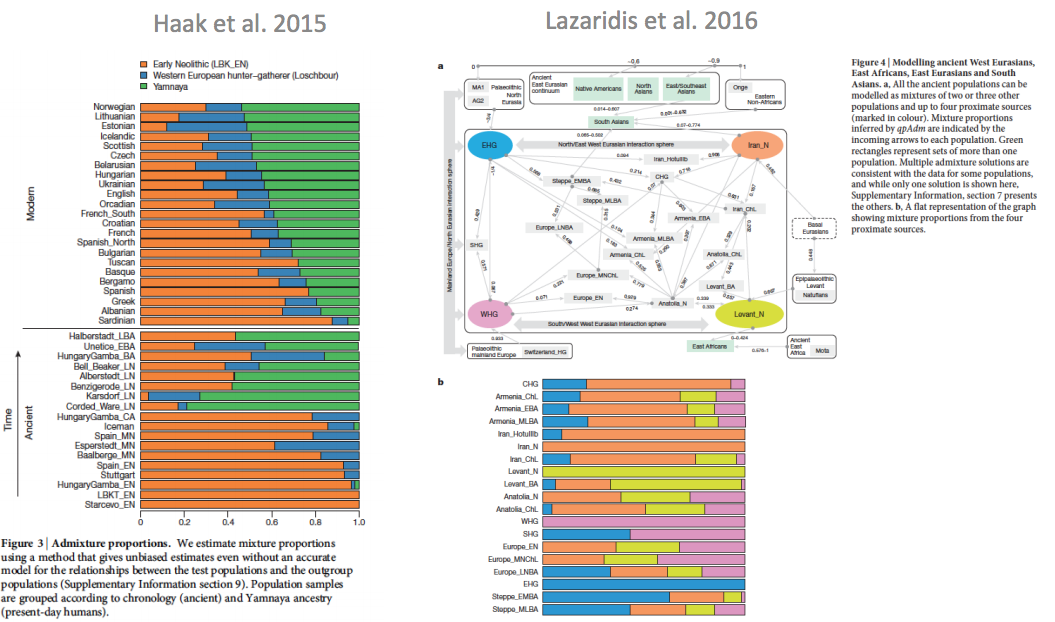 Please publish a correction to this statement.

(Correction 5): The article wrongly states that Skoglund et al.  2016 “presumed to offer the final word on the history and ancestry of an entire region.”

The truth is provably just the opposite. The last sentence of the published paper reads:

“Systematic study of ancient DNA from throughout Remote Oceania should make it possible to provide a detailed chronicle of the population movements and sex-biased population mixtures that shaped the ancestry of present-day Oceanians.”

In other words, our paper is extremely careful to state that the small sample size analyzed in the study—while sufficient to disprove some prevailing theories which was the main result in our paper—is not able to reveal the detailed history. Indeed, we have always believed that our findings in that study (and, for that matter, in Lipson et al. 2018) are just the start and not the final word (any fair reading of "should make it possible" contradicts the claim that we thought we had the "final word").

Please publish a correction of this statement along with the four others above.